At Little Sparkie Electric, we specialize in service work!

We frequently put on our detective hats as we track down electrical issues, ask and answer questions, and offer suggestions. Our goal is to give you the results you need – and more – while ensuring that projects meet or exceed all building and safety codes.

We work with commercial and industrial businesses, farms and residential homes on a wide variety of projects: 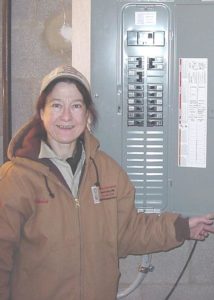 Sometimes I can talk a customer through a problem, and a service call isn’t needed!

Here’s what Joyce Burdette, owner, had to say about Catherine’s work:

“Her prices are very reasonable; she comes when she says she’ll come and stayed until all of the work is done. Then she clearly explained everything she’d done. I highly recommend her and have given her name to a number of people!”

Sometimes it can be tempting to procrastinate on service work. But here are some projects Little Sparkie recently completed that could have led to catastrophes!

We still have all of the affected original charred materials and exhibit them at trade shows.