This year’s Fire Prevention Week’s campaign theme is “Serve Up Fire Safety in the Kitchen!TM” 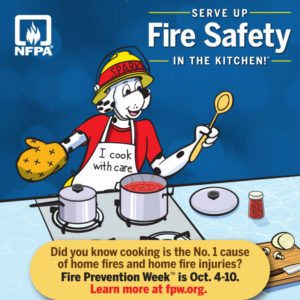 The campaign’s goal is to educate everyone about the simple but important actions they can take to keep themselves, and those around them, safe in the kitchen.

Unattended cooking is the leading cause of fires in the kitchen.  Keep kids safe and avoid accidents and injuries by keeping them three feet away from the stove while you are cooking.

Fire Prevention Week is observed each year during the week of October 9th in commemoration of the Great Chicago Fire, which began on October 8, 1871, and caused devastating damage.

When you need a trusted licensed Electrician, Call on Little Sparkie Electric!